What do civilians, fertilizer, animal feed, packaging, fuel, clothing and a way to remove CO2 from the air have in common? As crazy as it may sound, seaweed is the common factor here.
98 percent of our food production comes from the land. As much as 71 percent of the Earth’s surface is made up of seas and oceans. Should we be able to utilize the water for several purposes – such as production – there is much to be gained here. And what grows in the water, using CO2 as a nutrient? Right: seaweed!
Millions of years ago, before plants and trees existed at all, small single-celled microalgae lived in the water. From these, thousands of species of seaweed have evolved, which are packed with proteins, minerals and vitamins. In other words, healthy for both humans and animals, since research has shown that cows that eat certain seaweeds produce more milk and are healthier. They also emit less methane, which contributes to combating climate change!
All over the world, startups are beginning to see the potential of the green-brown algae and discover its seemingly countless possibilities. 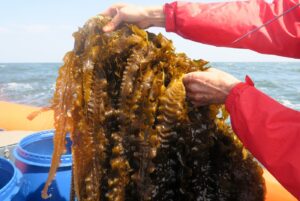 Let’s take a look at the numerous applications seaweed has to offer us.

In the most recognizable application: people know seaweed as the dark wrapper around their sushi snack. But did you know that seaweed burgers, seaweed bread, seaweed bacon, seaweed pasta and seaweed salmon (?) now exist? Seaweed is packed with protein and can play a major role in the protein transition. The production of meat emits an incredible amount of CO2, and the green strands from the sea can provide people and animals with the same nutrients as a replacement for meat. Calculations show that seaweed cultivation twice the size of Portugal could provide the entire world population with proteins. Large-scale cultivation in the North Sea in 2030 coujld even provide the amount of protein equivalent to 5.6 million chickens.
The Dutch Weed Burger has been making food from seaweed since 2012, with their burger consisting of soy and the seaweed variety kombu. Founder Mark Kulsdom says: ‘Our planet is getting depleted by the large-scale meat and dairy industry. There is less and less usable agricultural land to feed all those animals, due to loss of nutrients and soil erosion. At the same time, there are more and more people on earth. To feed them, we need future-proof proteins.’ 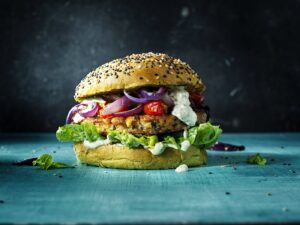 Seaweed contains many minerals and hormones, which are very useful for plants and soil life. Plants grow rapidly as a result, which is why seaweed is widely used as a fertilizer.

We use a lot of single use plastics for things like sauce bags, salad containers and ‘pods’ for in the washing machine. Traditional plastic food packaging has two major drawbacks. Firstly, they contribute to plastic pollution in the environment because they do not break down. Secondly, they often condense on the inside, causing mold growth. Packaging made from seaweed is durable and biodegradable, so you can just throw it in the garbage. Another big advantage of seaweed-based packaging is that the food dries out, which prevents mold from forming and gives it a much longer shelf life. This prevents food waste (because did you know that a third of the food produced worldwide goes to waste?). In addition, seaweed packaging is even edible and therefore suitable as animal feed. Because of its digestibility and biodegradability, neither animal nor environment suffers.
Unfortunately, the production costs of traditional plastic are much lower due to the cheap fossil fuels from which they are made. If multinationals like Unilever and Nestlé ever embrace seaweed packaging, we will be moving towards a circular economy, as the biodegradable packaging will enter the natural cycle.

As previously mentioned, seaweed absorbs a lot of CO2 as it grows. Ten tons of wet seaweed equals one ton of absorbed CO2. On one hectare you can grow 150 tons of seaweed. This means that you can absorb 15 tons per hectare and 1500 tons of CO2 per square kilometer. If enough of these plantations were established, enough CO2 could be extracted from the water, which means that the oceans could also extract more CO2 from the air.
One drawback: when seaweed rots, the stored CO2 is released again. Solution: by sinking the seaweed into the deep sea and letting it rot there, the CO2 can no longer enter the upper layers of the water and thus the atmosphere.

In the energy transition there is also much to be gained by using seaweed as a raw material for biomass and biofuels. Calculations by the Netherlands Environmental Assessment Agency (PBL) show that by 2050 we will need 1600 Petajoules of biomass as a fuel for producing electricity. Seaweed has the potential to take up a third of this. The brown strands can be split into sugars, proteins and minerals. These substances are then reprocessed into semi-finished products from which liquid fuel can be made.
KLM also seems to see the potential. Already since 2008 they have had the desire to fly on algae. Energy producer ExxonMobil aims to achieve this by 2025 by producing ten thousand barrels of algae fuel per day. In 2009, they jointly invested six hundred million dollars with biotech company Synthetic Genomics in converting algae to fuel. By 2017, they had produced microalgae that consisted of forty percent oil!

The clothing industry is the second most polluting sector, after the oil industry. As much as 8 percent of global greenhouse gas emissions come from the production of clothing and shoes. The industry is also responsible for the pollution of surface water and extreme water use. One T-shirt already requires 2,700 liters of water.
The Scottish Jasmine Linington designed a clothing collection made of seaweed. In turn, the American company Metawear has developed textile dyes based on seaweed, so that the coloring of clothing can also be sustainable. 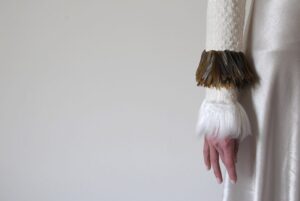 Despite the fact that the possibilities with microalgae seem endless, serious consideration must be given to possible risks involved. On a small scale, seaweed cultivation has positive effects on biodiversity. But the algae grow only for six months and then disappear with the harvest. Furthermore, large monocultures quickly attract pests and diseases, just as in agriculture. Is there a risk that entire ecosystems will be disrupted by cultivation?
Koen van Swam of the North Sea Farm Foundation says there are two ways of countering that. Firstly, seaweed grows in the winter and harvesting takes place in April or May. By allowing other species to grow in the summer, you get a nice base for marine life. Another important solution is that the anchoring of the plant is nature-friendly.
Zairah Khan, founder of research foundation BlueO2, indicates that seaweed cultivation is a complex product that still requires a lot of research. For example, are there enough nutrients in the water? And there is certainly still much to be done in terms of cost reduction, upscaling and knowledge.