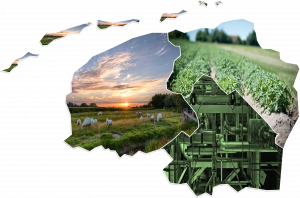 The Northern Netherlands is becoming increasingly important for the green chemistry industry. Under the name Chemport Europe, developments follow in rapid succession. Sustainable factories, pioneering schools and facilitating governments are building unique value chains, where far-reaching cooperation is the key.

Next month Avantium will start building the world’s first commercial plant for the large-scale production of FDCA, an important plant-based chemical building block for a new type of plastic. The unique plant will be located in Delfzijl, close to the site where Clariter will be building the equally unique plastic recycling plant in the near future. BioBTX, a producer of renewable BTX, will also be located here, as will SkyNRG, a biokerosene pioneer. There is a good reason why these sustainable initiatives are taking place in the Northern Netherlands. The location by the sea, where large amounts of wind power come ashore, plays an important role. The agricultural hinterland is a source of biomaterials. Educational institutions nearby think along and supply talent. Personnel are less scarce than in other parts of the country. And very important: there is an abundance of space, both literally and figuratively. Reinder Jacobi is working on behalf of the province of Groningen for Chemport Europe and is concerned with this ‘figurative space’. What I hear back from companies is that they feel welcome and well supported. In the Northern Netherlands, we welcome great initiatives with open arms, especially in the area of sustainable chemistry and industry. Facilitating these parties is our task.

Chemport Europe exists in order to do this as well as possible. This is a partnership of parties in the Northern Netherlands that are pursuing the same goal: to further expand the lead that the region has in the field of green and sustainable chemistry. The northern region is becoming increasingly renowned as an area for pioneering and experimenting, where start-ups find an ecosystem in which they can scale up quickly. Viewed from above, the Northern Netherlands is a miniature world economy. From the cultivation and supply of raw materials through the testing phase and upscaling to industrial production; everything takes place here. Because the chemical industry is traditionally strongly represented, the purchase of new, sustainable raw materials and products is also guaranteed. All within one and the same ecosystem. That is what we call the value chains, and the fact that you can close them in such a small area is something you don’t see very often,” says Bekkering. An example? Written-off wind turbine blades are dismantled here, ground into small pieces, and recycled so that, in time, new blades can be made from them. And these can then be sent out to sea from the northern Netherlands. Hydrogen is another typical example of the Northern Netherlands leading the way. Green electricity that comes ashore in Eemshaven is the basis, and the chemical industry further down the road already buys the green hydrogen. Far-reaching plans for further distribution and production are ready.

Waste will soon no longer exist. At various locations in the north of the Netherlands, waste streams are upgraded to raw materials that are processed in the immediate vicinity. 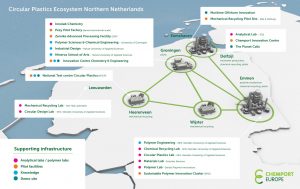 Bioplastics in a unique value chain

In between, companies and institutions work continuously on improvements and innovations together with colleges, vocational schools and the university. Reinder Jacobi: ,,This applies to all facets of green chemistry. The educational institutions are represented in Chemport Europe. This means that input from research directly ends up at the companies and vice versa, that issues from industry are quickly picked up by the schools. Even stronger: the curriculum can be adapted quickly if it appears that there is a need for it from the companies. The same kind of value chain is evident in bioplastics. They are produced in the region in Emmen and Delfzijl and also recycled there. CuRe Technology in Emmen has succeeded in chemically recycling PET and is working on more and better forms of polyester recycling. The Northern Netherlands shows that the predicted growth in the production of new plastics from fossil raw materials can be greatly reduced by scaling up new technologies.

Chemport Europe is the gateway to a mix of pioneering start-ups, established companies, young talents, research, governments that think along with us and a lot of space for entrepreneurship. The cohesion and cooperation are typically Northern Dutch, the opportunities and possibilities are of a global scale.